I Can Breathe Clearly Now

Americans are inundated with government analyses and news reports that are simply not based on fact. Many represent the best information circa 50-some years ago, when the federal Clean Air Act (CAA) was proposed, but fundamental errors in how the CAA was written and vast advances in health science result in regulations that are too strong in some instances, and fatally weak in others. But here’s the good news: protection is available for you and your family members, and you can do it yourself! You’ll learn how by reading this book.

I Can Breathe Clearly Now:

Protecting Yourself From Air Pollution

This is a book about a serious topic with life-or-death implications. It exposes and explores problems associated with soil and air contamination using complex scientific data that physicist Thomas Cahill and his colleagues produced through meticulous measurements and analysis over five decades. 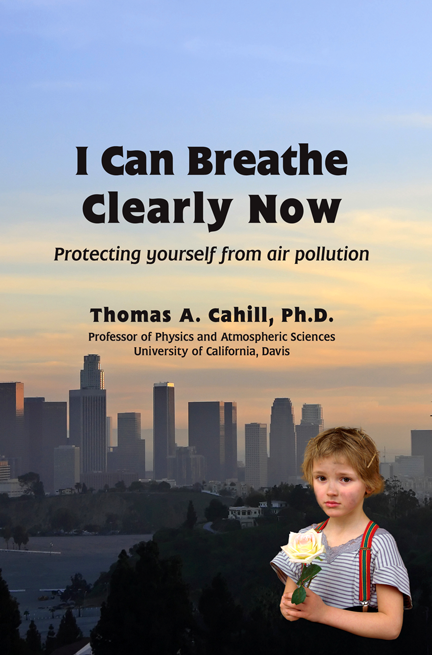 The deaths of millions of people globally each year, along with serious health problems in untold millions of others, may be preventable. But government inaction and industrial irresponsibility often stand in the way, as documented in a revealing book by Thomas A. Cahill, Ph.D., an internationally recognized professor of physics and atmospheric sciences from the University of California, Davis. I Can Breathe Clearly Now: Protecting Yourself From Air Pollution lays bare in 20 chapters the insidious detrimental health effects from numerous sources of air pollution, including diesel exhaust, unregulated ultra-fine metals, ozone, the toxic airborne fungal disease Valley fever, wood-burning stoves, and aerosols from radon decay. Each chapter includes a section on how readers can evaluate their specific risk, and practical ways to protect themselves from the pollutant in question.

I Can Breathe Clearly Now constitutes the aggregate of Cahill’s original research findings and groundbreaking analyses over the span of his five-decade career as an academic physicist and expert consultant for numerous state and federal government agencies. In the book, Cahill applied the best current science in exploring serious, even lethal, health threats that many air pollution agencies alarmingly ignore. The U.S. government’s 1973 Clean Air Act (CAA), one of the best laws ever passed, is nearly a half-century old and has fallen way behind modern science. Imperiled populations include children who experience cumulative losses in lung function as a result of living in the vicinity of freeways and busy roads choked with stop-and-go traffic, the disastrous impact of playing sports in high ozone conditions, premature heat attacks from brake debris, and lethal fungal diseases from alkaline soils. It also includes a major analysis of global climate change from a scientist who is deeply involved in climate research.
The 242-page book reveals and explores those and other problems associated with air contamination using complex scientific data that Cahill and his colleagues produced through meticulous measurements and analysis. Although the book is written for non-scientists, it contains detailed scientifically valid documentation in numerous tables and figures. The narrative is spiced with humor and previously untold stories, including Cahill’s inadvertent data collection misadventure during which he brought traffic to a standstill on busy Interstate 10 in West Los Angeles. The data he was gathering that day ultimately led to unanticipated new insights about the propagation of toxic lead-contaminated fumes from automotive exhaust. That and other research he conducted also unveiled new information about the volume of very fine and ultra-fine metals that automotive brakes spew into the environment.
While I Can Breathe Clearly Now gives readers vital information they need to reduce their risk of exposure to contaminants, Cahill also divulges other widely exaggerated threats that in fact are not serious. No one but Cahill could have written this book, because he has been pivotal in pioneering environmental pollution research throughout the past 50 years. His groundbreaking research findings have influenced landmark health-protection policies — as well as rankled inflexible bureaucrats, corporate executives and even two U.S. presidents.
Above all, saving lives and safeguarding health were Cahill’s principal intentions in assimilating the body of his life’s work for I Can Breathe Clearly Now: Protecting Yourself From Air Pollution. This could be among the most important books you will ever read.

Thomas A. Cahill and his students played a key role in scores of air quality successes, including in mandating automotive catalytic converters in California; prevented a coal-fired power plant from polluting the Grand Canyon; helped save the sea gulls nesting on islands in Mono Lake; and forced unwilling federal agencies to adopt measures to protect workers at the site of the collapsed World Trade Center. During the latter part of his life, Cahill tracked Greenland summit site aerosols and climate for the National Science Foundation; the California Department of Justice has commissioned him as a consulting expert for a massive toxic lead and cadmium cleanup in Los Angeles; and he used the techniques in this book to assist the U.S. Embassy in Beijing in protecting air quality in staff apartments.
In the autumn of 2018, about nine months after publication of his autobiography Critical Masses: Exposés of a Catholic Nuclear Physicist, Tom was diagnosed with myelodysplastic syndrome (MDS), a bone marrow failure disorder that interferes with the ability of the marrow to produce healthy blood cells. In the spirit of scientific inquiry, he took part in a clinical trial that helped slow but was unable to halt the progression of the disease. He died on May 1, 2019, at age 82.
Buy now

I Can Breathe Clearly Now: Protecting Yourself From Air Pollution is available as a trade paperback through Amazon.com, Barnes and Noble and other online sellers. It also can be ordered through any retail bookstore.

Digital
For e-book readers
ISBN-13: 978-1-937317-42-3
Available in the United States, Canada, the United Kingdom, Australia and other nations (at prices subject to exchange rate variations).

The book contains dozens of graphs, charts, photographs and tables, printed in black and white. But the author has prepared a downloadable Microsoft PowerPoint document containing those data displays, about half of which are presented in color. Readers who have purchased a copy of the book may download that file free of charge. Please contact us to obtain the required password.